Chat with us, powered by LiveChat

The latest and greatest from the Calzone Case Company® 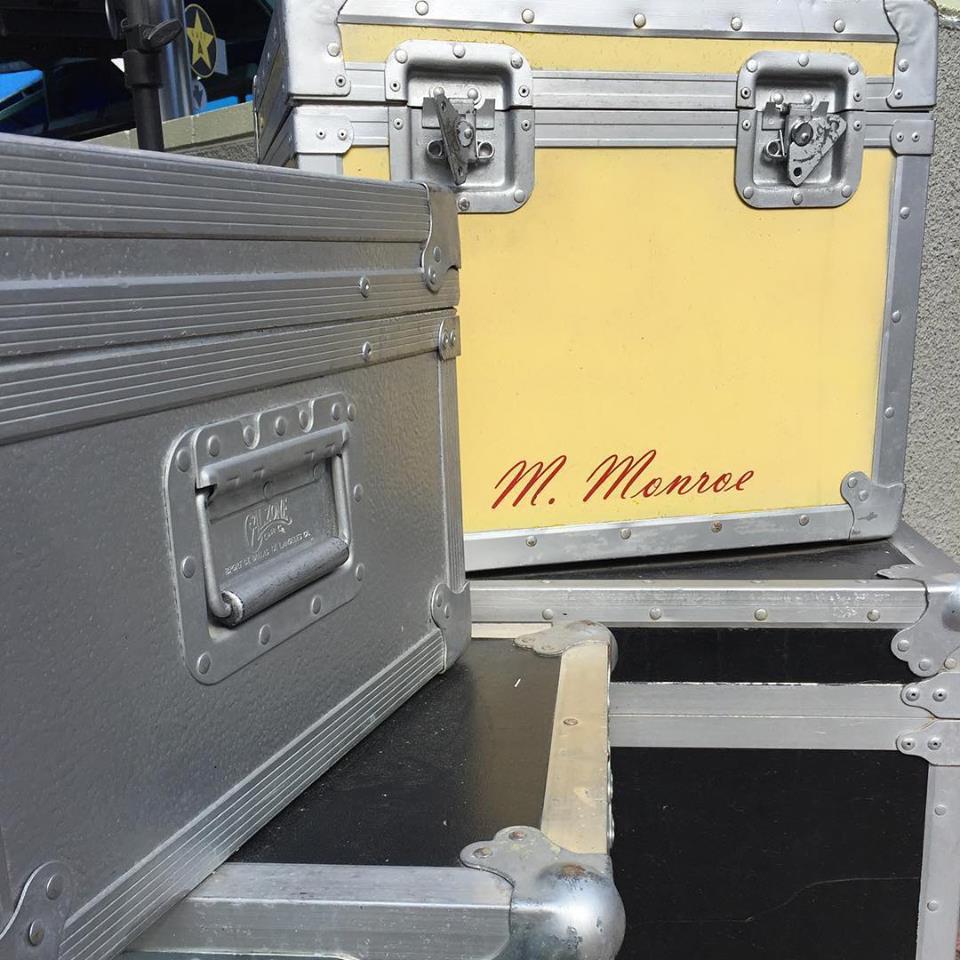 Our cases were spotted at the famous Universal Studios Hollywood backlot tour line. Protecting Hollywood magic since 1952, the cases we make last a very long, long time! When riding Aerosmith’s Rockin’ Roller Coaster at Disney Studios Orlando be sure to check out the case stack at the end of the ride where you view your screaming ride photos. That’s right, Calzone & Anvil Cases for sure!

The Calzone Case Company® family was glad to be back at the annual InfoComm trade show in Las Vegas in 2018. “We’ve attended this show for well over a decade and it’s always been a great success. That’s why we return year after year”, said Joe Calzone, president of the Calzone Case Company. Several new products were introduced – see the video on the latest case configuration that securely stores and transports a large screen monitor. For more information call us at 800-243-5152 or 800-FLYANVIL (800-359-2684),

New Kid on the Block

In the early 1970s, Joe Calzone was a professional drummer in the Northeast; like every musician out of their teens, he was ready to ‘make it’ in the music business. But it was  the keyboard player in his band, and specifically the purchase of the group’s first Anvil case that gave Joe the inspiration for a lifetime in the protection business. “We were on our way to becoming superstars,” Joe fondly recalls, “and I couldn’t afford any Anvil Cases for my drums ­ so I tried to make some. My dad and I built a few metal cases at a sheet metal shop ­ which I still have! There’s a metal trap case, and I figured out you had to put wheels on it, and a smaller one that was more manageable for the society gigs. We also made a cymbal case and a gong case … you have to have a good gong case.”

While this activity was spot on for the future of the case industry, it was perhaps a sign that Joe’s musical career would take a back seat. He says that like many bands, they had trouble keeping the band together and finding good gigs. “We were having great difficulties keeping our guitarists, and we lost interest in the club scene. With the music we had to play, we got a little disenchanted with the live music scene, and I saw an opportunity ­ based on a discussion I had with Dennis Berardi, who was one of the owners at Gracin’s Music on 48th street in New York.”

Dennis was also a drummer, and decided he was going to start a guitar company with a guy named Gary Kramer, and Pete LaPlaca who worked for Norlin Music at the time. Joe told them he was thinking of making some cases, and asked if they could do something together. Encougaging me to pursue it, Joe put a plan together to build cases for their basic guitars. His first two employees were his uncle and Robert Mackno, brother of keyboard player.

Joe explains, “Fortunately my uncle worked at a furniture manufacturing facility in Norwalk, and he let me use their Thomas Register ­ A to Z ­ and that’s where I sourced casters, hardware, rivets, etc. It was the only source at the time, and I was able to get ahold of a variety of suppliers. One day I was at the hardware store with my dad, and we were trying to figure out how to put these angles on the case. We saw the window frame section, and it had this interesting looking extrusion that the frames would slip into ­ that’s where we got the nemesis of the double angle construction.”

Kramer cases hit the scene in 1975. “We started talking in 1974,” says Joe. “That was the development stage while I was still playing music for a living. I didn’t make a paycheck for about five years, but that’s fairly normal. At the first NAMM show we piggybacked on Kramer’s booth in Anaheim it was our introduction to the music industry. We showed six different cases ­ guitar in black, bass, acoustic guitar ­ which also served as a trap case when we put a divider in, cymbal, attache, and microphone ­ and we started to sell to music stores that carried Kramer. One of our most successful reps was in the San Jose area. We actually set up a warehouse in San Jose, and shipped quite a number of cases it was a hotbed of innovation and music.”

Not surprisingly, shipping cases into California put them on Anvil’s radar. “We ran into Wayne Thompson at the end of one of those first NAMM shows, as we were wheeling out our first workbox, which my dad helped make. Wayne saw us and came over. He said, ‘Hey I can take care of that for you, just leave it with me and I’ll ship it back to you from my shop’. We said ‘no thanks, we’ll take care of it … but thanks for the offer.”

The 100th Anniversary Of The Sinking Of The Titanic

In observance of the 100 year anniversary, many descendants of the passengers, both survivors and victims of the tragedy reflected on the lives of their ancestors.  Dr. Robert Ballard discovered the wreck of the Titanic in 1985. Since then, many fact finding voyages to recover artifacts and lost relics have occurred.  Recently on one of the voyages, Anvil Case Company was called upon to build cases that could protect priceless relics recovered from the wreckage. Anvil Iron® our most extreme line of defense, was chosen to do the job. Once again Anvil was there to protect a piece of history. 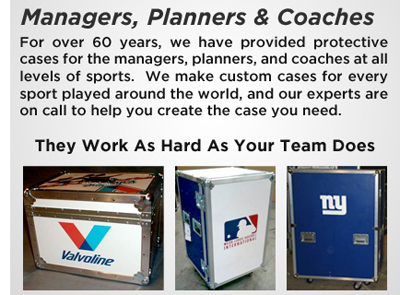 Our trunks are found at most every sporting event, from Protecting Auto Racing to the Stanley Cup we are there providing protection. Perfect for transporting everything sports related we build our cases to be reliable, strong and easy to use. Insure everything arrives the way it left by using the best cases money can buy, Anvil. 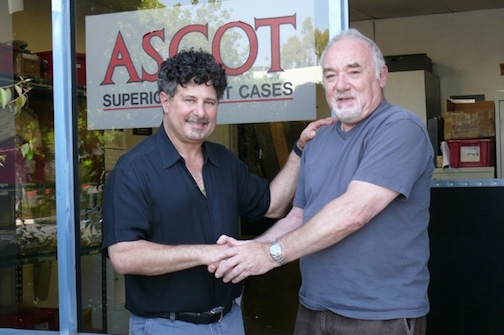 Calzone / Anvil Cases, the industry leader in the manufacture of fabricated cases, announced today that it acquired the assets of Ascot Superior Flight Cases on May 31, 2013. Ascot Cases was founded by Rob Cooksey 32 years ago in Newbury Park, CA, and quickly became a favorite among many industries, including rock n’ roll touring, where his roots ran deep. Cooksey began as a touring roadie and production manager for numerous classic 1970s bands, ultimately becoming Deep Purple’s manager before getting off the road and founding Ascot Cases. He directed his efforts towards providing the touring industry what he felt would survive life on the road. Ascot’s unique ‘one box’ fabrication processes and raw material components assured the company’s products the respect of the touring industry.

Calzone / Anvil President Joe Calzone comments, “The acquisition of Ascot Cases brings another level of protection to Calzone / Anvil product offerings, in support of the touring world, as well as the expanding aerospace, trade show and exhibit markets. Rob also brings a tremendous reputation among tour managers with his ability to deliver products on time and correctly – even under the most challenging delivery requirements. This coincides with our philosophy of exceptional customer service and support.”

Cooksey adds, “I’d like to thank our many exceptional customers who have supported us through the years, and tell them how excited I am to be a part of this team; I’m thrilled the Ascot name will live on through our incorporation.”

Cooksey will remain with the company as the key contact for his customer base in support of sales and designs. The Ascot facility will be relocated into the newly expanded Anvil Case facility in City of Industry, CA. The companies wish to assure all of the loyal Ascot clients that the manufacturing processes and material choices which have set Ascot apart from its competitors will be continued after the move into the Anvil facility. Ascot’s telephone number (805/498-6156) and email (ascotrob@gmail.com) will remain in operation. Please contact Rob Cooksey at 805/498-6156 or Joe Calzone at 203/352-6900 to learn more about the combined companies or to receive a quote on your case requirements. 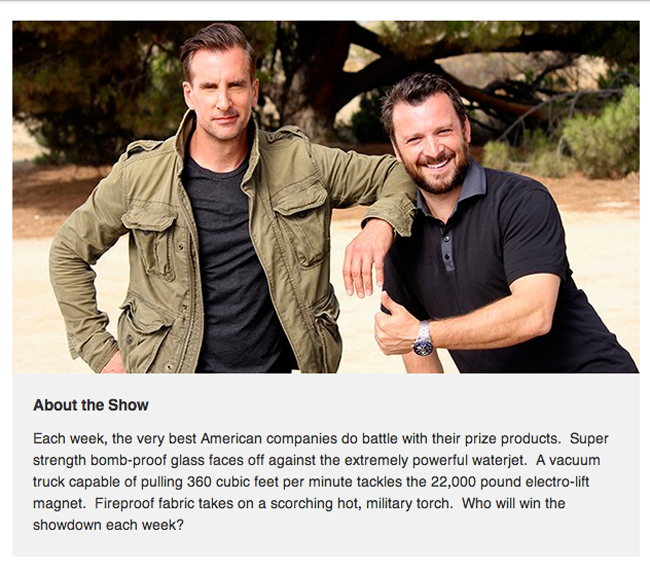 On Friday, May 23rd, the Calzone / Anvil Case Company, the leading manufacturers of ATA style road cases, will be featured as a contestant on ‘Showdown of the Unbeatables’, a new National Geographic Channel television program that premiered in April of this year. Hosted by Brian Unger and Zane Lamprey, the series pits opposing companies who compete in a showdown with their most sophisticated machinery as Calzone / Anvil Cases will face off against the New Way Sidewinder refuse truck. New Way is America’s fastest growing manufacturer in the waste industry, and their state-of-the-art refuse trucks are recognized for their strength and construction.

Calzone / Anvil President Joe Calzone commented, “It is an honor to compete in this exciting new televised competition. Calzone / Anvil and New Way are each leaders and innovators in our ﬁelds, and this show is not only great entertainment, it reminds us that the words ‘Made In America’ still hold incredible value. I hope that our many users past and present will tune in to root for us, and to learn more about the technologies behind The Calzone / Anvil Cases vs. New Way episode will air on Friday, May 23rd at 10 p.m. EST, but check local listings for exact times. Learn more about ‘Showdown of the Unbeatables’ by visiting NatGeo’s social media channels or on the web at channel.nationalgeographic.com/channel/showdown-of-the-unbeatables.

Love0
Contact Us for a Quote Get a Price